Who’s at fault for how much is on display?

A recent incident at a local middle school illustrates the widening gap between common sense and knee jerk reaction. The basics of the story are as follows; on an eighty degree day over thirty girls were given citations for wearing shorts that presumably violated the school dress code, while no citations were given to boys who wore shorts that same day.

The citations led to what was called an “enthusiastic protest” calling attention to “outdated double standards,” a predictable response that might be popular to make but is intellectually dishonest. 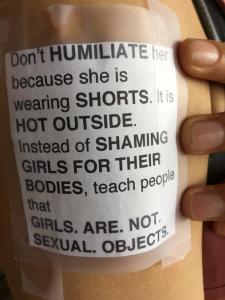 Par for our public discourse there’s an assumption here of unfairness, of gender bias.  The truth, however, is that boys do not wear shorts nearly as revealing as girls. They don’t wear yoga pants or leggings to school, either.  That boys did not get any citations is neither proof of bias or an attempt to shame girls for their bodies.

The citations are about clothes and what is appropriate for school and the learning environment. That’s it. But it’s much more fun to express outrage. So I’ll address what I see in my work with youth in various settings, including schools.

I’ve recently spent time in public elementary schools and I’ve seen girls in 3rd and 4th grade wearing Daisy Duke shorts, tights and yoga pants and short shirts.  And just to be clear these aren’t leggings under a skirt which would be appropriate anywhere.  These are young girls, displaying their bodies in a manner that the boys just aren’t.

Boys are wearing baggy cargo shorts and loose t-shirts.  Occasionally you’ll see a boy in tightish pants, but this is usually because they just had a growth spurt.  Boys at this age haven’t hit puberty yet and are still a little clueless about the opposite gender.

But in a few more years when they hit middle school the hormones will be raging and they’ll be going to school with girls who are wearing Yoga pants, a sweatshirt and fuzzy boots.  How that much ass and thighs on display became a fashion, I don’t know. But let’s review a few things.

One: It is pretty widely know that boys/men are visual.  If, in the learning environment, they are seeing so much on display, why aren’t we being sensitive to boys who may be distracted?

Two: When boys/men don’t wear nearly as revealing clothing why is this gender bias to ask girls/women to be a bit more modest?

Three: Our public discourse currently bemoans the objectification of women while simultaneously blaming much of it on male behavior. But nowhere in this conversation do we ask why women turn themselves into objects in the manner that they do, by wearing such revealing clothing. This leads to the trickle down effect that allows our young girls to wear yoga pants, crop tops, and Daisy Dukes to school.

Much of my work is with at-risk populations.  Many of them engage in risky behaviors. We’re parenting them and attempting to guide them on social norms.

Thankfully, the boys style of shorts or pants hanging so low we could see most of their underpants has seemed to fade.  Yet I am unconflicted in telling boys that exposing your derriere to classmates is inappropriate. When I cue the boys to pull up their pants or tighten their belt, they might shrug or grumble, and I might have to remind them again later, but they do it. Pretty much end of story.

With girls though, it’s much different.  When female co-workers cue them to cover up their boobs, for example, there’s a great deal of drama from stomping about to open resistance and defiance.  It is as if their entire self worth is wrapped up in how they display what they’ve got. And this is healthy?

This aspect of the feminine continues to be blamed on our broader culture, and of course, this culture is defined as the patriarchy.  As issues like this come up, the discussion centers around women’s rights and gender bias.  This isn’t just a red herring, it’s inaccurate and unfair.

These policies or actions are not telling young girls to be ashamed of their bodies.  But they are asking for a social norm that is not distracting to boys and does not degrade the girls. If we are going to fix some of our issues regarding the objectification of women, eventually the discussion is going to have to include how women objectify themselves.

This entry was posted on May 10, 2017 by A.J. Simonsen in commentary and tagged bias, boys, Daisy Dukes, dress codes, gender, girls, shorts.