Gobsmacked.  That was my initial reaction to the not guilty verdict issued by the jury on the armed occupation of the Malheur reserve in Eastern Oregon.  It was interesting, though, how quickly that reaction faded.

Yes, they’re guilty of several offenses; carrying firearms on federal property, destruction of property, desecration of a religious site and perhaps intimidation.  But conspiracy?  That’s simply giving them too much credit, they weren’t that organized.  In fact, the charge of conspiracy is, quite possibly, the only example of federal overreach in this whole incident. These folks didn’t have a plan past protest. 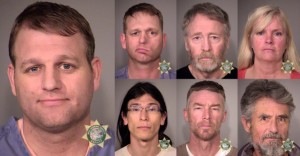 I’ll admit, I was against the Bundy’s and their ilk the minute they took over the refuge, because they were armed.  They had the nerve to quote Martin Luther King in their defense, without understanding one wit about peaceful protest.  The power behind peaceful protest is how it disarms your opponent.  You don’t arm yourself and call it passive resistance.

So Second Amendment yahoos displayed their complete lack of understanding of area history and land laws to the nation, demonstrated their alternate reality through stunning cluelessness to how intimidating their actions are to others and, so far, they have gone unpunished.

But I also don’t want to simply be snarky.  The ridicule we see in our political arena is toxic to the point of dividing neighbors.  And that’s got to change.

So to be fair, as the trial progressed and news filtered through, many things became clear.  For example, David Fry is mentally ill, he had no coherent idea why he was there.  He should be in a long term care facility and should lose the right to own or carry a gun ever again.

The Feds put all their eggs in one basket and failed to be convincing in making their case on conspiracy charges.  They didn’t give the jurors anything else to work with.  Had they done so, most of the other defendants would probably be serving 2-3 years in jail on lessor and more appropriate charges.  Remember, Al Capone was finally jailed for tax evasion.

Because the federal government mishandled the charges, there is concern that sympathizers and others may be emboldened to organize or act in a similar manner.  I’m not so sure about that.  You can’t have a standoff with only one party.  There were repercussions for their actions, if just by the Feds maintaining a blockade and the threat of prosecution.

Juror’s asked the judge more than once if there were other charges they could consider and stated afterwards their decision was a rejection of the prosecution’s charge of conspiracy, not an endorsement of the defendant’s actions.

Well, if there’s a similar situation, maybe the Feds will apply what they learned for next time.  Because with the expanding rural/urban divide, I’m pretty sure there will be a next time.