Carolyn Hax muffs it when giving advice to a Mom with a child who’s heading down the path to divorce; by framing it as a need to be “safe.”

A concerned Mom writes in saying her daughter married too young, largely because of a pregnancy. She’s had another child since.  Now 28, her daughter is “miserable.” Her daughter asked her Mom for money for a deposit on a 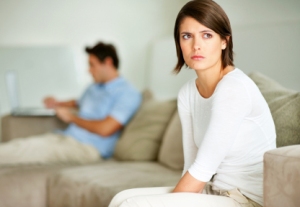 rental. LW’s husband doesn’t think they should get involved.

Hax responds by suggesting that maybe they pay for mediation, first. But ultimately, Hax admits that if it was her child, “I’d help my daughter in this situation” as she’ll ultimately do what she wants. “If I can ensure that she has a clean safe place to think -and bring the girls- then I will.”

I generally like what Hax has to say. But she errs here in how she frames helping out the letter writer’s daughter; by suggesting she needs a safe place and to bring the girls.

Based on what the letter writer shares (that was published and is all we really have to go on), there’s no reason to think there’s any abuse or pressing need for safety. If that was an issue, or even suspected, the letter writer would have mentioned it.

Instead, what Hax has done is frame another separation in a manner that perpetuates many stereotypes. Just because a divorce could be contentious doesn’t mean anyone is unsafe. When giving advice to both men and women, absent any claim of neglect, abuse or incapacity, the default should be 50/50 split.

Hax could have prevented contributing to many assumptions by simply saying it differently, “Help her with a place so she can have some breathing room to think, and that is a nice, clean place for when the girls are with her.”

This is more nuanced, but also a lot more fair. It assumes joint custody, and equal access to both parents, rather than assuming the worst – which is what many readers have done (more so than Hax).  If you read the comment section, you’ll see how many jump to conclusions that are simply not warranted based on what we know from the letter writer.

This tendency to leap to a side in separations and divorce fuels distrust between the genders.  I’m not saying there aren’t a plethora of unfortunate and messy divorces and situations.  I am saying there is a great deal of uncritical sympathy extended to women, that ends up being quite unfair to men because it assumes the worst.

This needs to change, and it starts by offering advice that isn’t adversarial.

“I will help you find a place, because you need some space to think this through.  I also want it to be a safe place for the girls, when you have them.  Just remember, you’re still going to have to co-parent with you ex-husband, so make sure you’re  being transparent about these steps you take in the coming months.”