NCAA is rife with hypocrisy

Did you see the news recently regarding Eastern Washington University’s starting QB Vernon Adams transferring to the University of Oregon?  Adams falls into the 5th year graduate category; he will have completed his undergraduate degree at EWU and can transfer anywhere with a year’s eligibility.  The NCAA allows this, ostensibly, for players to pursue a masters degree at a different institution of higher learning.

But many are crying foul.  Montana State coach Rob Ash stated “Our guys need to start and finish at the same school. We cannot be perceived as a farm system or Triple-A ball club or anything like that.” While Big 12 Commissioner Bob Bowlsby suggests “It smacks of hired gun,” going so far as to suggest “There typically are no good academic reasons for the transfer.”

Well cry me a river. So what if it’s about the money? How can you argue it’s not about the money when the highest paid public employee in 40 states is a football or basketball coach? (Awesome graphic from DeadSpin.)

The NCAA’s hypocrisy on student athletes in the face of billion dollar television contracts and million dollar coaching contracts and job mobility for everyone but the players is really beyond the pall.  I have no idea how many of the NCAA rules regarding amateur status can be legal.

Take, for example, the case of Oregon State University baseball player Ben Wetzler.  Baseball players are drafted after their 3rd season. They can talk to the teams who draft them to explore their options, but can retain their amateur status as long as no money is exchanged.  So, after being drafted in the 5th round by the Philadelphia Phillies, Wetzler entered discussions with the team but ended up opting to remain at OSU for his senior season.

The Phillies turned Wetzler in for retaining an agent.  The agent, they claim, was quite involved in the negotiations.  Though neither Wetzler or his agent received any money, NCAA rules stipulate that an “advisor may not negotiate on behalf of a student-athlete or be present during discussions of a contract offer.”

Tell me, in a country that values the right to counsel, how does this logic hold up?  Wouldn’t the ability to negotiate a contract or consider one’s options with fair representation be within the scope of this right?  To the NCAA, apparently not.  Wetzler had to sit out 20% of his senior season.

It doesn’t end there though. While there’s discussion to close the loophole for a 5th year senior, who has actually followed through and graduated to transfer schools, any old coach can switch schools. Take, for example, Oregon State women’s basketball associate head coach Mark Campbell who left OSU recently in the most egregious of changes, going to in-state rival UO. Does he have to sit out a year? Nope.

Student athletes are basically denied the ability to transfer in conference because rules stipulate they’d have to burn two years of eligibility to do so.  Out of conference they still have to burn a year of eligibility or redshirt to transfer.  This contributes to a class system where the privileged have options and mobility, while the rank and file workers, the athletes, have none.  Hired gun?  This is a two-faced claim.  And it’s beginning to get tested.  It won’t hold up.

In March of 2014 he National Labor Relations Board ruled that Northwestern football players can vote to unionize.  The ruling deemed them school employees based on the following: the number of the hours they put in, the control the university has over them and the revenue they generate.

So it is no surprise that the Northwestern football team did indeed vote to unionize.  With that right they can begin collective bargaining.  With the largess of college sports, it’s not surprise that the court ruled in their favor. 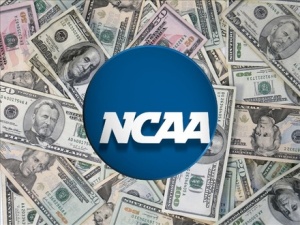 And that’s just the beginning.  We are seeing more cases being brought before the courts attempting to address the inequities and usury of so-called “amateur athletes.”  Former UCLA basketball player Ed O’Bannon sued the NCAA for continuing to use his likeness in video game and not sharing the proceeds.  He’s got a good case.

In fact, O’Bannon was joined by other college basketball and football players and reached a $40 million settlement with EA Sports, a video game manufacturer and the NCAA’s licensing arm for improperly using the likenesses of athletes.  The NCAA has needed to be brought to heel for sometime.  This is a start.